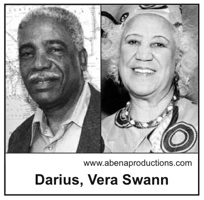 The Swann Fellowship was named for Darius and Vera Swann, who on behalf of their son James became the lead plaintiffs in Swann vs. Mecklenburg in the 1960s. Darius Swann was the first African American Presbyterian missionary ever assigned outside of Africa. The family’s experiences in India led them to appreciate the value of an integrated society for human development. Rev. Swann died March March 8, 2020 in Centreville, Va.. His Washington Post obituary is here.

We will be a prophetic voice for inclusive public schools where all Charlotte-Mecklenburg children reach their potential.

The mission of the Swann Fellowship is: to challenge the people of Charlotte-Mecklenburg to demand, sustain and send their children to a quality, equitable, integrated public school system; to inform and educate all people on that task; to provide forums for dialogue about diversity, excellence and equity; and to collaborate with other groups.

Formed in 1997 by members of several Charlotte religious congregations, the Fellowship focuses on being a witness to the value of diversity, and educating the public on public school issues as they relate to this and allied subjects. The Swann Fellowship is a nonprofit organization exempt under section 501(c)(3) of the Internal Revenue Code (EIN 56-2106776). Financial information about this organization and a copy of its license are available from the State Solicitation Licensing Branch at 1-888-830-4989. The license is not an endorsement by the state.

The Fellowship has a Board of Directors of no more than 20 members. Prior to the creation of the nonprofit organization in 1999, board membership was informal and often shortterm.

Board Members over time

The Fellowship’s first website, at educateclt.org, was put up in early 2001. It was designed as an online filing cabinet for PDF files of the weekly editions of Educate!. The site allowed nonsubscribers easy access to the editions. The Wayback Machine, a nonprofit archive of websites over time, first scanned the educateclt.org site in June 3, 2002. The 2005 scan here is typical. After suspension of Educate! publication in September 2005, the site was used intermittently to post some material, but there was no online archive. An example of how it was used is from April 24, 2006. The educateclt.org site was taken down in December 2006.

Construction of the Fellowship’s second website was under way in June 2006 at the swannfellowship.org address. It was first visited by the Wayback Machine on July 27, 2009, but entries in the archive began in December 2006.

This third Fellowship website is constructed in WordPress format to make it more user-friendly for smartphone users. Material from the 2006 html site was transferred into WordPress in February 2016. Internet links in the html material that had gone bad by February 2016 were fixed or deleted during the conversion.