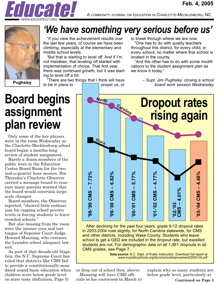 It was known as “Educate! – a community journal on education in Charlotte-Mecklenburg.” At its high point it had an e-mail distribution list of about 3,000 people. Most of the copies went to people in Mecklenburg County, but it was used by educators and researchers throughout the country.

From a simple beginning as multi-recipient e-mail, Educate! grew to include graphics, pictures and lots of text. Some PDF editions were used as a way to distribute, to a wider audience, the full text of court decisions so vital to shaping the public schools of the period.

The period covered by the publication includes the last years of Supt. Eric Smith, the years of Supt. James Pughsley, and the first three months of Interim Supt. Frances Haithcock’s year.