The statement from the Civil Rights project came under this headline: “New Study Finds Big Racial Gap in Suspensions of Middle School Students.”

“Middle schools across the country,” Project coordinator Laurie Russman wrote, “are suspending children with alarming frequency, particularly in some large urban school districts, where numerous schools suspend a third or more of their black male students in a given year, according to a new study by education researchers Daniel J. Losen and Russell Skiba, Indiana University and published today by the Southern Poverty Law Center.

“The study found that African-American children are suspended far more frequently than white children in general, with especially high racial differences in middle school, causing them to miss valuable class time during a crucial period in their academic and social development. 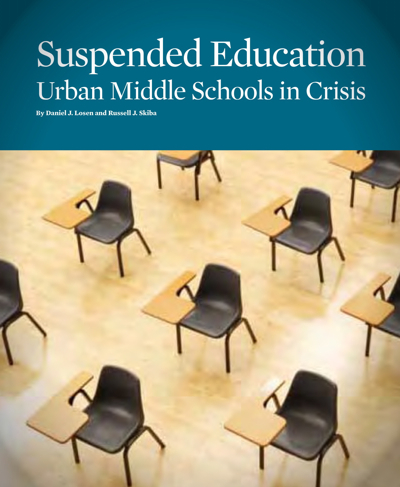 “In a national sample of more than 9,000 middle schools, 28.3 percent of black males, on average, were suspended at least once during a school year, nearly three times the 10 percent rate for white males. Black females were suspended more than four times as often as white females (18 percent vs. 4 percent).

“For all students in the schools examined, the suspension rate was 11.2 percent. Hispanic males faced a 16.3 percent risk of suspension.

“In 18 urban districts examined more closely, the average suspension rate for all students was 22.2 percent, double the average for all districts. The study found that 175 middle schools in these districts suspended more than one third of their black male students. Of those, 84 suspended more than half the black males enrolled. Schools with high rates of suspension were also found for other racial groups.

The report – Suspended Education: Urban Middle Schools in Crisis – can be read here.

“Losen is a senior education law and policy associate at the Civil Rights Project at the University of California Los Angeles. Skiba is director of the Equity Project at Indiana University’s Center for Evaluation and Education Policy.

” ‘It’s clear from these findings that zero-tolerance policies are pushing too many children out of school at a critical point in their education and are having a disproportionate impact on students of color,’ said Marion Chartoff, a senior SPLC staff attorney specializing in education issues.

“The study adds to a growing body of research questioning the fairness and effectiveness of zero-tolerance policies, which often mandate suspensions for specified offenses.

” ‘As the number of suspensions for kids of all races and all grades has risen dramatically, the gap between suspension rates for blacks and whites has more than tripled – from about 3 percentage points in the 1970s to over 10 percentage points today,’ Losen said. ‘The incredibly high frequency of suspension use in urban middle schools, and the large numbers of youth of color who miss school as a result, is rarely discussed in debates about what we must do to improve our schools.’

“The researchers focused on middle schools because studies suggest that suspensions in those grades may have significant, long-term repercussions for students and because few previous studies have separated middle school data from that for all grades, masking the extraordinarily high frequency of suspension in middle schools.

“Using 2006 data from the U.S. Department of Education’s (DOE) Office for Civil Rights – the most recent data available – the study examined suspensions in approximately 9,220 middle schools in every state in the country. This data was used to calculate the percentage of a given racial or ethnic group suspended at least once during a school year.

” ‘The study shows very high rates of discipline for black students in some of our large urban districts,’ Skiba said. ‘The important policy question this raises is whether we as a society are comfortable with putting this many students out of school, especially since we know about the negative effects of being out of school.’

“An earlier study of all out-of-school suspensions in one state found only 5 percent were issued for disciplinary incidents typically considered serious or dangerous, such as possession of weapons or drugs. The remaining 95 percent were either categorized as ‘disruptive behavior’ or ‘other.’

“The study released today also notes there is, in general, no evidence that racial disparities in school discipline are the result of higher rates of disruption among black students.

“The study recommends that policymakers pay much closer attention to school suspensions at the school and district level and use this information as part of school and district evaluations. Further, the U.S. Department of Education should identify and address unlawful discrimination, and federal law should require an increase in the collection and reporting of school suspension and related discipline data, especially data that looks at both race and gender. This data could help identify schools with high suspension rates for review, as well as determine the need to provide technical assistance on effective alternatives to suspension for schools in crisis.”