CMS continues to be the district that made resegregation work. 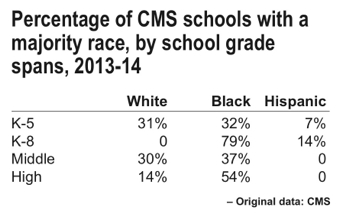 About a third of K-5 schools have a white majority. Another third have a black majority, while 7% of the K-5s have an Hispanic majority.

About four-fifths of the K-8s have a black majority. Eight of those K-8s are 80% or more black.

High school programs include not just the big regional high schools, but lots of small programs within them. By program, 54% of the programs now are majority-black, 14% majority-white.

Of greater interest than the schoolhouses is the toll on individual children: that is, how many or what percentage of them are going to schools where public policy has led to them being sorted out so thoroughly by race.

The results are in the adjoining tables, based on the recent release of CMS demographic data for the 3rd month of the 2013-14 school year, which is here. 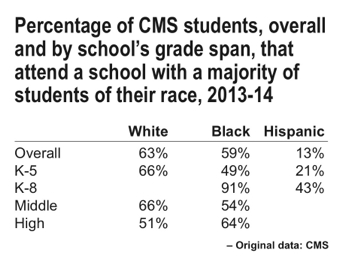 That’s because, when the school board succumbed to tribalism in 2002, it rewrote the legal system of school assignment to mostly mirror Mecklenburg’s racially and socio-economically segregated housing patterns. And that’s exactly what a lot of the board’s constituents demanded.

The achievement outcomes from this system are a topic for another day, but they are well known: The results clearly don’t work equally well for all tribes. Result? Equality under the law was thrown under the bus by the school board.

Is inequality under the law one of your cherished civic values? If not, have a chat with your school board members. An earlier generation depended on courts to intervene. This time, the solution may require electoral activism.