Last week’s school board meeting included an update on literacy efforts within CMS. The CMS chart below at right details the crisis: At most grade levels, fewer than half of CMS students are college or career ready in reading proficiency.

“There is absolutely no silver bullet,” Schultz said about the literacy challenge, “but we are going to take our best stab at it here in Charlotte-Mecklenburg Schools along with the support of our community.” 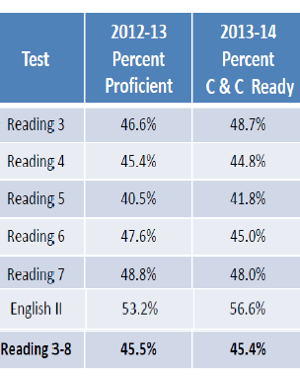 Taking their best stab at literacy has been the goal of educators for eons. It’s not like literacy was just invented. And teacher in-service training, designed to sharpen teaching skills, isn’t new either – except, of course, that it’s a rarity these days since the N.C. legislature obliterated funding for that purpose during the Great Recession.

So what is different today from the school days experienced by older folks in this community? Many older people who went to Charlotte or Mecklenburg County schools before the 1960 merger were prepared by their teachers not only to be literate, but to take the plunge and be the first in their families to graduate from college. What’s different now? Two examples of the gulf that has developed between school and home:

– Teachers once lived and worked among the children they taught. If you go back far enough in the history of N.C. public schooling, you’ll find that teachers took rooms in homes in the school’s community. More recently, teachers were neighbors. They knew their students’ families. And there wasn’t much, particularly about inappropriate behavior, that did not pass quickly from schoolhouse to home.

As one young man said recently about attending West Charlotte High in the late ‘80s, “If you got caught skipping, somebody knew you. We lived in the neighborhood. We walked to school…. It was on.”

Thirty years ago, principals might encourage their teachers to visit each of their students’ homes as school began. For teachers who voluntarily undertook the project, it was a once-a-year effort – a far cry from living down the block from your charges. Today’s parental engagement efforts appear to be focused exclusively on making parents responsible for bridging any school-home gaps. That works well for some parents, but not well at all for others. The CMS trek toward that North Star does not appear to go through students’ homes.

– A recent news story about middle schoolers getting laptops noted that the laptops don’t leave school. The story also said CMS was buying digital versions of some textbooks. So that means textbooks won’t be going home at night. Think about that.

Without getting into the current debate over the value of homework, is it healthy to create yet another chasm between school and home? Decades ago, perhaps parents could not even read what their children were being taught. But they could, and did, monitor that their children were reading their textbooks, and ask them about what they had read.

Yesterday’s schooling was not nirvana. Many children were left behind and got little by way of an education. Low-tech industries were built on the sweat of poorly schooled workers. Today, young people face a very different world in which literacy in its many forms is mandatory.

A Project LIFT staffer said recently: “I tell the parents I work with on a daily basis, you have to fight for your children. You have to say something, you have to get up and you have to let the school board know that you’re not going to stand for it and it’s not OK…. Don’t curse and yell. Document. Talk. And start talking to the school board and tell them what you’re about…. We have to talk to people who can actually change something.”

Wouldn’t it be nice if that comment became an appendix to CMS’s Literacy Update?

As the comment points out, parents are vital in helping to improve education. Big issues come up at home that parents need help with. But this issue of low literacy rates involves more than half the children in CMS, and that means we’re not talking about barriers to education created by a few parents’ bad attitudes or lack of support.

The big barriers to literacy are the ones created by us, the citizens of Charlotte-Mecklenburg, and our representatives on the Board of Education. The barriers include low expectations; employers paying their workers wages that leave the workers and their children in poverty; environments unlinked to each child’s learning needs or aspirations; the creation of schools that no member of the Board of Education would send a child of their own to. That no parent, given a workable choice, would choose. That few staff members and teachers would or do choose.

So speak to the school board. “Document. Talk…. We have to talk to people who can actually change something.”