A second meeting of the CMS Policy Committee this morning finished the first review of the district’s guiding principles for student assignment.

Most of the discussion from board members present revolved around how the principles have created schools that are not giving children a quality education. 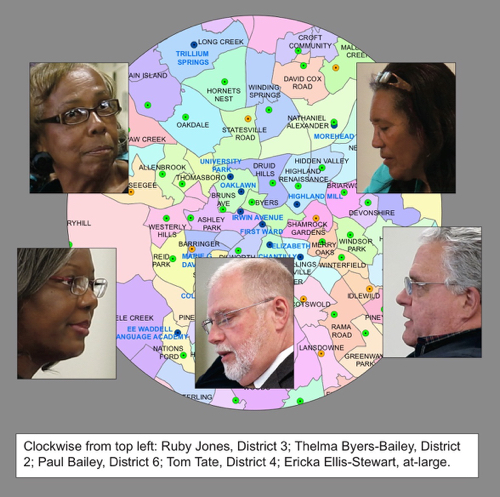 There were no complaints that the district staff had not implemented their policies. Instead, board members were focused on the results, intended and unintended, of the policies themselves.

Videos from the first meeting on April 29, and PDF files of the policies under discussion, are in the Archive associated with these pages.

Not present at the April 29 discussion but very vocal today was Ruby Jones, appointed by the board to represent District 3 after Joyce Waddell left the board for the N.C. Senate. Jones, with four decades of work on many levels of education, insisted that concentrating high-needs children, as the 2002 assignment plan did, simply made schools that would never educate kids well because staff would have to spend so much time on behavioral, emotional and other issues that the children brought to school.

Paul Bailey from the south Mecklenburg District 6 repeated his view that it was “inappropriate,” given the district’s guiding principles, for CMS to be consigning any child to three failing schools in succession, from kindergarten to graduation.

Policy Committee chair Tom Tate said the board itself would have to decide how deeply and thoroughly to review assignment. The issue was on board members’ minds in part because they were planning to spend the late afternoon beginning discussion of a search for a superintendent.

The discussion of student assignment is next scheduled to surface publicly at the full board’s May 26 meeting at 4 p.m. in a small room in the Government Center. A discussion covering changes since 1999 in student demographics, assignment trends and facilities is scheduled to run at least four hours.

Below are two sets of videos from today’s discussion. The top two include excerpts on various issues discussed at the meeting. Below that are eight videos recording the entire session.