The lawyers gather today in Chapel Hill today to mark the 45th anniversary of Swann v Board of Education. That case, which went to the U.S. Supreme Court and profoundly shaped modern Mecklenburg County, is a milestone on the path toward righting the wrongs of Jim Crow that denied many children their right to a sound basic education. 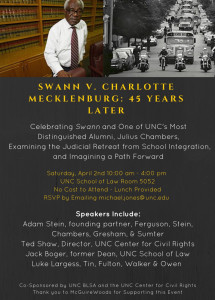 We’ve retreated lately in that march toward equitable opportunity.  And perhaps the lawyers have nothing much they can do now to reverse the tide and advance the cause of justice. That’s certainly been my impression as I tried and failed to interest the conference in hearing an alternative vision of how to proceed.

So what follows will not be said at today’s anniversary conference. Cynics like me will say that’s because there are no legal barriers to its implementation. The barriers seem to be more about us as one people, and our commitment to look out for all children. Here’s the plan in less than 400 words:

Stop using all input criteria for controlling school assignment. That would include race, socioeconomic status and most particularly residential address. Instead, have elementary assignments based on an educational measure of outcomes. I am not an educator and have been waiting for many months for educators in Charlotte to propose such a measure. But one such measure is level 1 and level 2 reading scores.

Within weeks of entering pre-K, students have been given tests such that teachers know which children are already reading well, and where the rest fall on a continuum of reading readiness. And the data on reading just keeps piling up after that. This data could be the basis for assignment.

Allow all parents to choose an academic program for their child. Adjust program sizes so that every parent gets a first or second choice. Operate the programs in schoolhouses near where the children are whose parents want the program.

Then, and this is crucial, assign children to schools such that no school, no school, has an outsized number of lagging readers.

In Charlotte-Mecklenburg this weekend, there are lagging readers at every single elementary school. Our problem, however, is that the vast majority of lagging readers are currently assigned to just a few schools. Overwhelmed, staff at those schools cannot possibly meet the children’s needs. All staff make the effort, and most will burn out doing so.

Part of the reason for the burnout is that those classrooms have been shorn of high-achieving readers who could help set the tone and lead by example. We as a people know we learn from one another. The habit starts at birth, and is very strong among young children. Our classrooms should embrace what we know about child development, not prevent it.

If every school had a share of struggling readers but not an overwhelming number of them, schools would not fail our children. And given the demographics of the lagging students, every school would be reasonably balanced by race, socioeconomics and place of residence. Program options would harness the massive power of choice to engage parents as well as children. The schools would look like us all. Districts would be back in the business of education.

And the lawyers? They could focus on some other problem.