And back in 1999, when the first elements of the current resegregative assignment plan first emerged, the Swann Fellowship noted:

“Everything we know about education tell us that to mass low-income children together is to deprive them of the support they need. No amount of extra staff or resources can make up for the things they will be denied. Are we as a community willing to allow this to happen?

“Some among us have little expectation that today’s political will to give the schools extra resources will last for long; we are reminded that the community that cut budgets annually for years and let the schools slide into disrepair is the same community these children will depend on in the future to keep resources coming.”

Today that future is now.

Below is a photo of a poster prepared for a Swann Fellowship meeting that followed the release in November 1999 of Supt. Eric Smith’s first “choice” assignment plan. While small changes were made before the plan was implemented in 2002, the basic framework was adopted. And now, with revenues in doubt, the school board is considering cuts that will leave high-needs children assigned to high-poverty schools without the additional resources initiallly granted those schools. 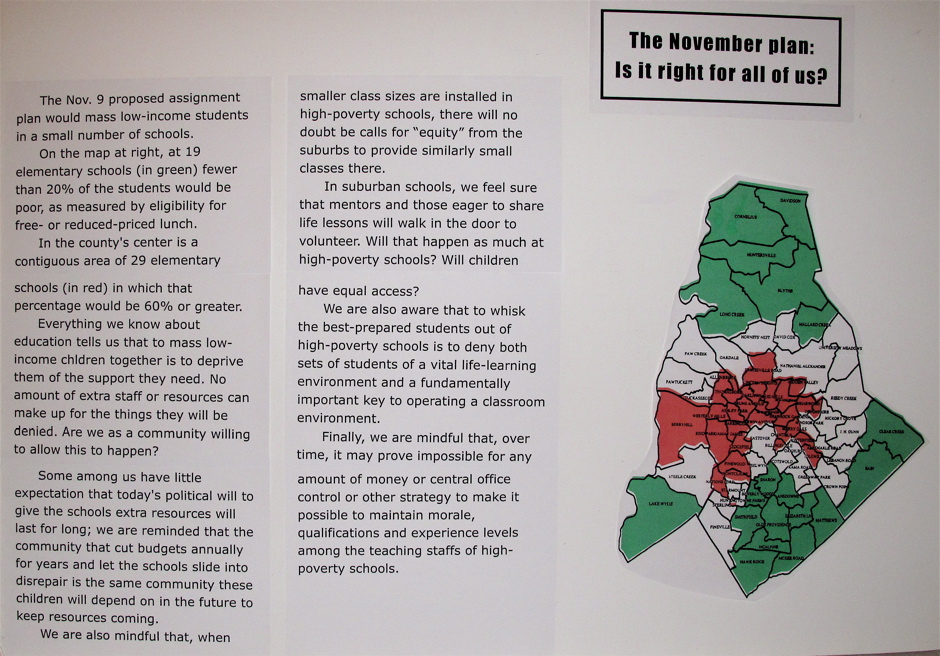 The poster below listed the Fellowship’s core beliefs, including this: “‘Choice’ is a poor foundation for student assignment because it is unjust. Family income, not a child’s need for education, determines the extent of choice available.” 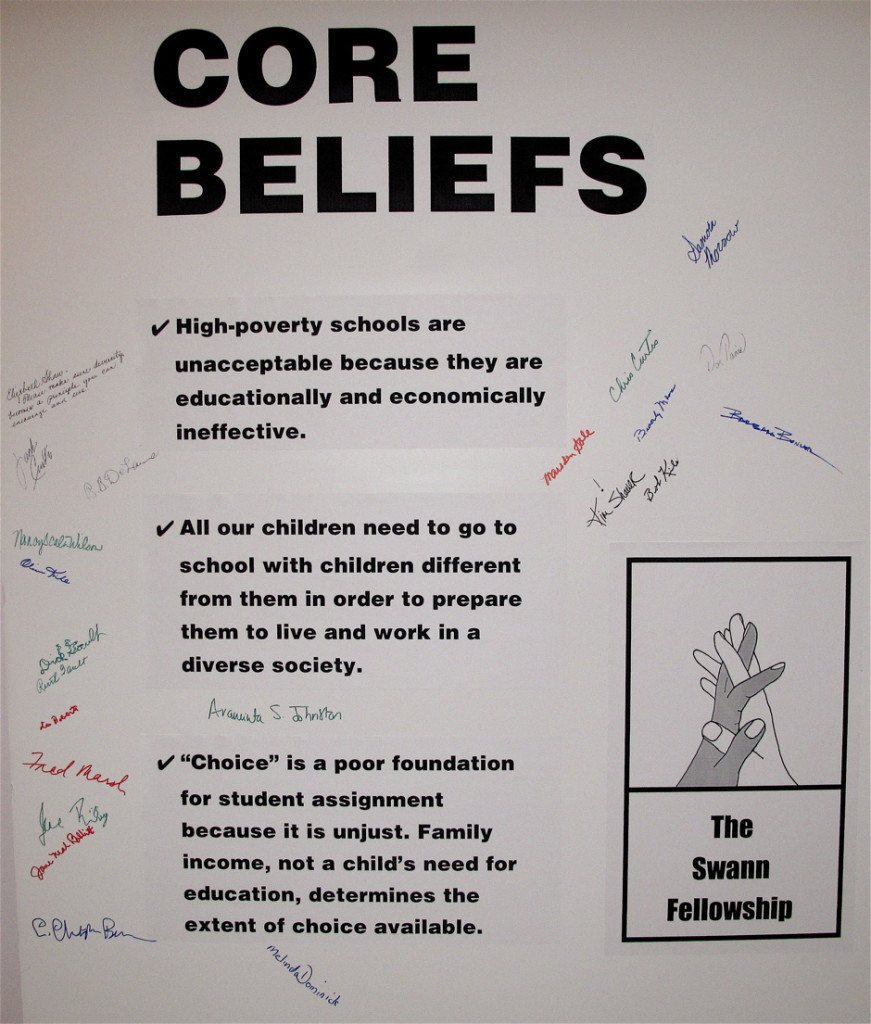 The Swann Fellowship has always delighted in embracing a certain amount of self-mockery about its name. Lots of people have never heard of unfeathered creatures named Swann. The poster below shows photos of people who had attended earlier Swann meetings.

The Fellowship was not named for a bird, but for Vera and Darius Swann, African-Americans who served as missionaries in India in the 1960s, then returned to Charlotte and found that their son James would be bused past the closest school to an inferior segregated black school. Their lawsuit on behalf of their son James led to the federal court case that forced the community to end racially segregated schools in the 1970s. The 1999 federal court ruling declaring an end to court oversight threw the issue back to the community, which through its elected leaders chose an assignment plan chieflly linked to neighborhood residence. With housing patterns of the 1990s as segregated or more segregated by race and socioeconomics  than they were in the 1960s, the decisions guaranteed the resegregation that followed and that is crippling CMS efforts to provide the sound basic education mandated by the North Carolina Constitution. 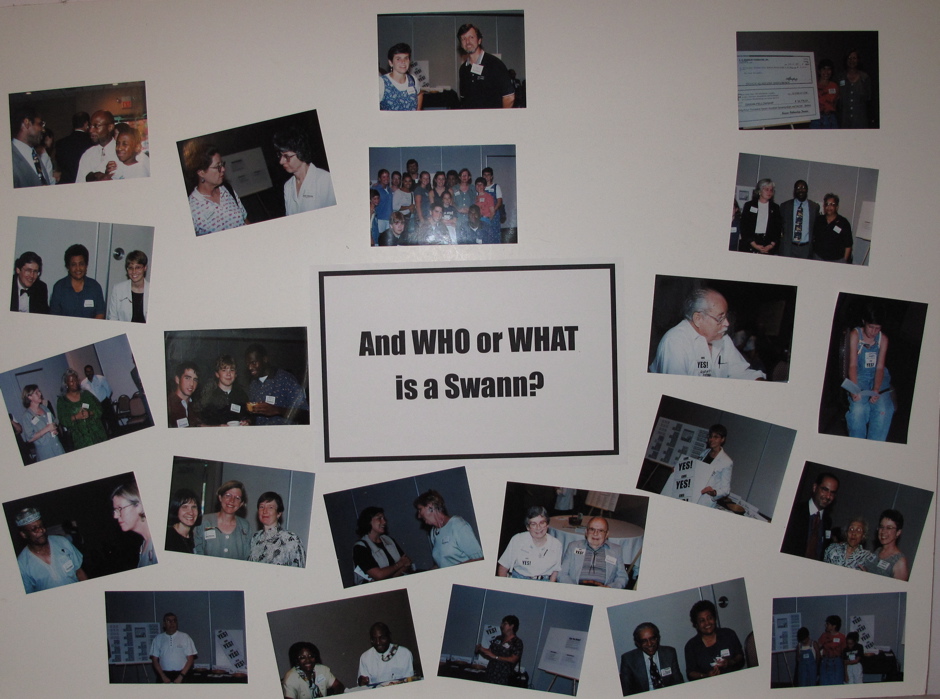 Throughout 1999, as the U.S. District Court case reopened the Swann v Mecklenburg case and then declared the system unitary, the Fellowship placed advertisements in the Charlotte Observer and the Charlotte Post promoting an alternate vision for schools that served all children, and avoided concentrating high-needs children. The photo below is of a poster of those ads. One ad read: “May it please the court, many in this community object to their government operating ‘separate but equal’ schools. NEVER AGAIN!” 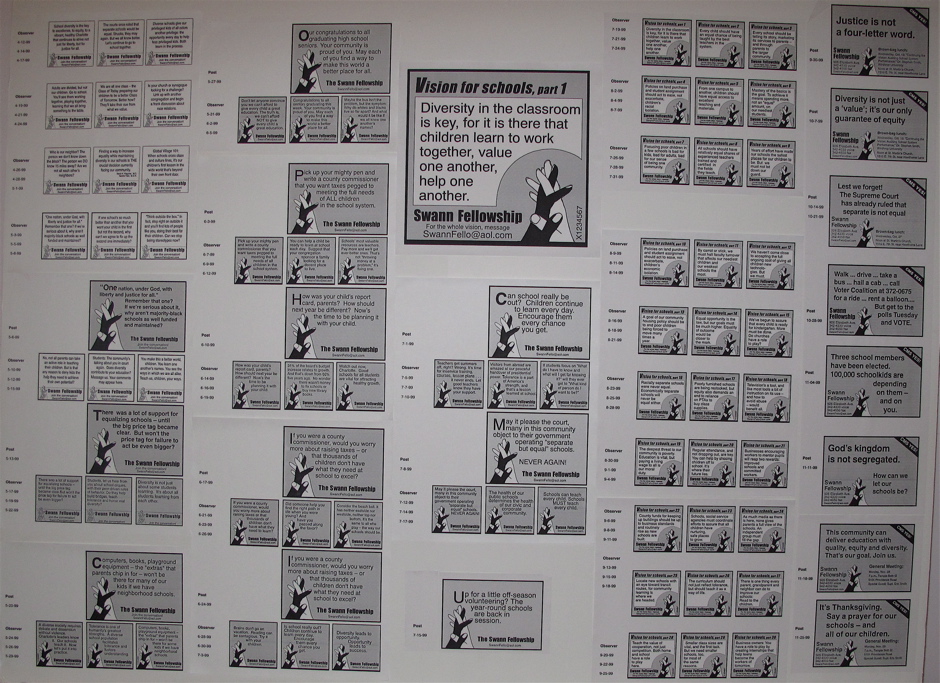 An historical note: This page was put up in 2009 as an archival record because the fragile 1999 posters were about to move from one attic to another in Charlotte. As of February 2016, the posters remain in the attic – a bit worse for the wear and tear of the move, and now many more years in an uninsulated attic during hot Carolinas summers.