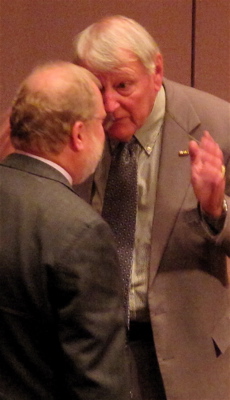 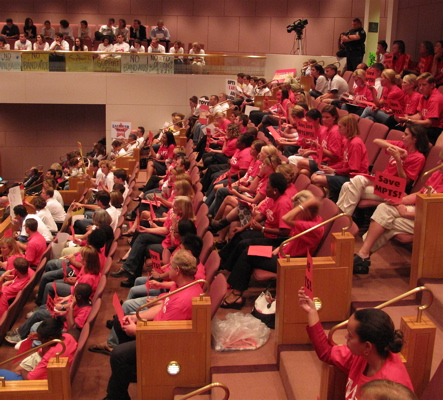 School board District 4 member Tom Tate, left, confers with at-large member Joe White after Tuesday’s board meeting. Myers Park Elementary parents were dressed in red, while Eastover parents dressed in white as the board discussed initial options to deal with crowding at Eastover. Community meetings begin next week as CMS officials attempt to have a board decision by November so that relief at Eastover can be implemented next fall.

Earlier in the meeting, board members said they would not move Cotswold families to East Meck High to relieve Myers Park High crowding. But board member told Supt. Peter Gorman that they might be open to other options, including other boundary changes or the removal of the International Baccalaureate magnet program from Myers Park. The effect of Tuesday’s discussion was to give some parents a sigh of relief, and to energize entirely new groups of parents to engage the board in upcoming proposals.

There were several references Tuesday to how changes in the number of students living in any given neighborhood give rise to crowding or underutilization of individual schools. Unspoken was the reality that the reassignments that parents find so disruptive and fight so strongly are precisely the result of the current board’s leading commitment under its student assignment plan – its use of lines on the map to determine where all non-magnet students are assigned to school.

School attendance boundary lines were in use when children rode converted milk delivery wagons to school. And they’re just as outmoded. Perhaps some of the parents energized by the current reassignment debate would like to explore other options. If you’re one of them, contact Steve Johnston at the Fellowship at [email protected] to join an ongoing effort to identify the premises for the next student assignment plan that will bring Charlotte-Mecklenburg into the 21st century.