Two school board members, a dozen or so CMS staff and a couple hundred parents gathered Tuesday night  at Myers Park High School to explore options to relieve overcrowding at Eastover Elementary.

Several parents chastised staff for offering short-term fixes that might leave Eastover overcrowded once again in only a few years. 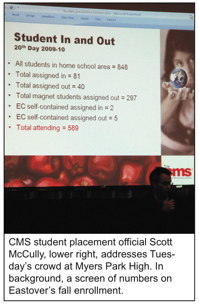 One of the staff proposals involves splitting off some of the Eastover attendance area, and assigning it to a new neighborhood school in the Dilworth building now used for an arts magnet. A Dilworth parent told the crowd that the PTA on Monday had backed that proposal, not because the arts magnet wants to move, but because the parents believe their building has been put in play as a way to solve Eastover’s problems, and that if the arts magnet doesn’t find a home elsewhere, it will eventually be closed. The parent pleaded with school officials for another year to prepare for returning the Dilworth building to neighborhood school status.

Indeed, there were several calls Tuesday night for a year’s delay of all options affecting the schools in the “historic neighborhoods” in the central city.

A First Ward teacher present Tuesday night rebutted statements from parents in the audience that First Ward would not be a safe place to send their children. But there were no parents from First Ward addressing the crowd about how that school feels about the Eastover proposals. Two options on the table would reassign Dilworth and a portion of Elizabeth from Eastover into the attendance area now assigned to First Ward, and then make either First Ward or Dilworth the school serving the neighborhood and the other being the arts magnet school.

Student placement Executive Director Scott McCully, who ran Tuesday’s meeting, asked those in attendance to write down any suggestions they had for how to deal with Eastover.

And McCully offered three of his own. As reported by The Charlotte Observer’s Ann Doss Helms, McCully “told the group that the current options to relieve crowding at Eastover Elementary – which would affect Myers Park Traditional, Dilworth and/or First Ward elementary schools – could be expanded to include other nearby schools, such as Selwyn, Sharon or Billingsville.”

CMS is trying to have a recommendation for the school board in November, in time to implement any changes in fall 2010.

On Thursday at 6:30 p.m. at East Meck, the traveling school boundary road show takes up proposals to relieve crowding at Myers Park High.