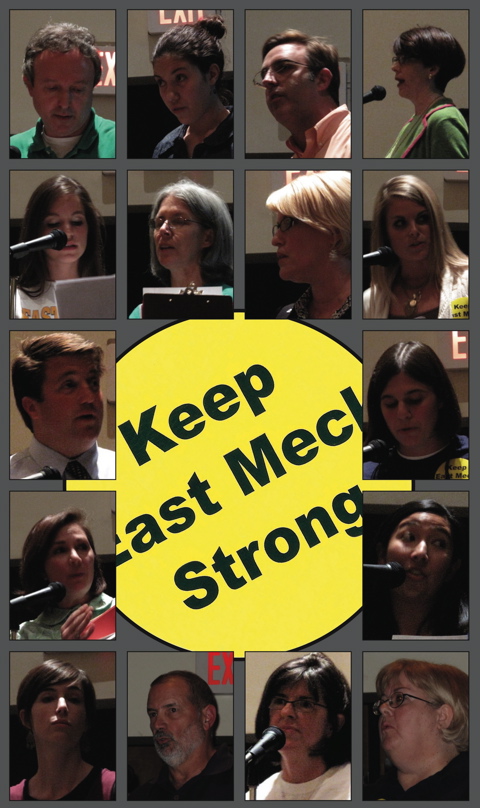 They expressed dismay that the debate pitted two strong set of parent groups “against” one another.

But by far most of the comments from parents, students at the two schools and staff members at East Meck were directed at the school board – their policy decisions, their seeming disregard for their own guiding principles, and of course that seven of the nine board members were nowhere to be seen in this second of four community meetings on assignment.

Board chair Molly Griffin and District 4 representative Tom Tate have been at both community meetings held thus far.

The very first speaker asked staff to state what the real problem was that the staff hoped to solve by the proposal to move some or all of the Myers Park International Bacca-laureate  program to East.

Scott McCully, executive director of student placement, replied that CMS administrators were comfortable with leaving East Meck with that roughly 1,500 students  that are projected for 2010, after hundereds of students leave for new assignments with the opening of a new high school in Mint Hill. So what is the problem? the questioner pressed.

For many of the East Meck parents and students, the “problem” is an expectation is that losing hundreds of students will reduce the number of classes, the strength of the school’s atlhetic programs, and a loss of dedicated teachers.

A number of speakers from East Meck said they were not trying to shut down Myers Park’s IB program. Indeed, the crowd appeared to be convinced that the school board would never agree to reduce its size, much less move it.

Instead, parents said, they just want more students at East. 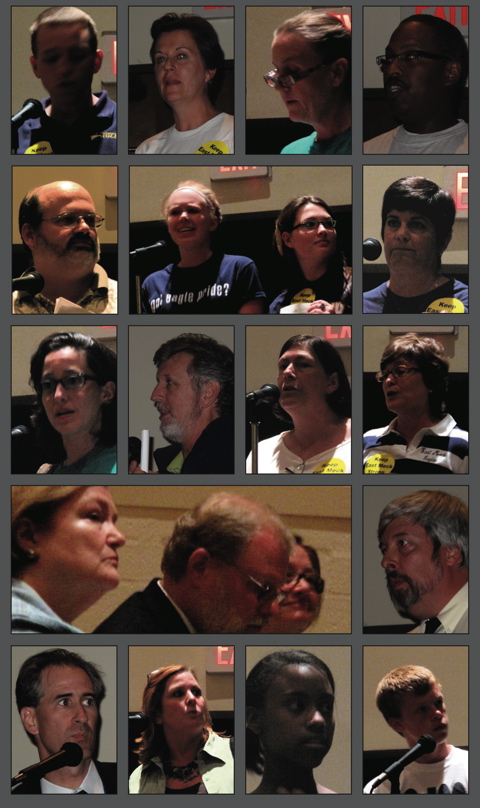 Some of the ideas for attracting more students:

– McCully asked if East parents would be amenable to leave at East several hundred students now scheduled to be reassigned in the shuffle created by the board last summer to populate the new Mint Hill high school. McCully mentioned students living in Piney Grove and Crown Point west attendance areas. Many parents in the East Meck auditorium said that would be fine.

– One speaker, noting that North Meck has a better graduation record in its IB program than either Myers Park or East, suggested creating a single IB program at East for the entire southern end of the county.

– East Meck math teacher Kevin Strawn asked for East to become a choice high school, allowing it to open later in the morning, use a different course schedule and pursue other offerings that would attract more students.

– Instead of moving students from adjoining high schools as the board chose to do last summer, allow the new Mint Hill high school to open small, and allow projected growth within the school’s more logical boundaries to fill the seats over time.

This community meeting was notable for several things:

– The crowd hectored staff when their questions were not answered. Indeed, staff seemed ill-prepared to argue any case, or explain why schools in similar circumstances are treated differently. There was almost a “the-board-made-us-do-this” tone to the affair. Veterans of earlier assignment hearings noted that both board and staff have often refused to speak at all at such meetings.

– Parents from the two high schools got into something of a conversation at several points during the meeting. Individuals from both camps railed against the staff’s refusal to involve parent representatives from the schools earlier this spring when work first began on assignment issues. And at least one principal of the multiple schools affected by the assignment change proposals this fall insists that one long-standing tradition of CMS remains: Top administrators and planners rarely if ever ask the principals of affected schools for information, background or advice. The tradition may go back as far as the mid-1970s.

– What appeared to be an unusual number of teachers spoke. Some were veterans. Others said they were grateful to be back for their second year. The disruption of layoffs and then re-hirings leading up to the opening of school in August may have had the salutary effect of spawning coalitions between teachers and parents to advocate for their schools.

Thursday’s hearing included strong voices from Myers Park, though the vast majority of the more than 200 people in the auditorium were from East Meck.

Next Tuesday, the community meetings continue, with a meeting at Myers Park High at 6:30 p.m. on the Myers Park-East situation.