In the video of this meeting is a striking exchange, just a little over 3 minutes long, that goes to the heart of the fears and anxieties gripping portions of the public as the CMS Board of Education wrestles with how it assigns children to school. The prime speakers are, first, District 6 member Paul Bailey, then District 4 member and Policy Committee Chair Tom Tate. Give a listen. Click the arrow to begin.

This rift that runs deeper than language: Can it be bridged sufficiently to create schools that work for all children? Or will the bridging be enough to improve the prospects for some children – but not all?

In a meeting also dealing with workers’ comp and surveys and cooperation with other elected bodies, the heart of the discussion on student assignment consumed just a few minutes. No decisions were made, and no words were written down. But it was an opening foray into what the board says it must do, which is to define what it means by “diversity.” And if it wants to use diversity as a standard in student assignment, it certainly must define what it means.

Much of the media coverage of the meeting focused on the survey of students and parents. The Observer noted that race, ethnicity, gender and socioeconomic status were being considered as factors in diversity. But how would such issues affect assignment?

The current guiding principles have a section called diversity. Here’s what it says: 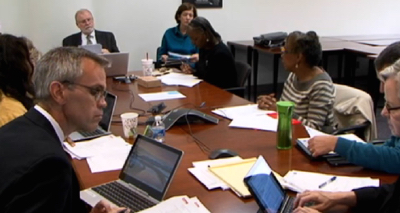 “The student assignment plan will reflect the demographics of the school feeder areas in order to create diverse learning environments that better prepare students to live in our increasingly diverse country and to compete successfully in the global workforce.”

By creating feeder areas that are mostly white or minority and mostly rich or poor, the 2002 assignment created schools that reflect that lack of diversity. Most board members have supported doing something different. But what?

The proposed revision of the diversity section of the guiding principles reads this way:

“To prepare students to be successful in a global society, the Board will provide expanded school choice opportunities and magnet programs that will enable all students to thrive in a diverse (ethnic, racial, socio-economic) environment, thereby preparing them for a global workforce.”

Note the focus on creating more choice and magnets – meaning more ways for parents to abandon their assigned schools. But what does that do for “all” students? And what about the children left behind? How does it serve the interests of children whose parents, rich or poor, are not able or willing to seek out those choice or magnet options?

Below is a window to the CMS video of the entire meeting.